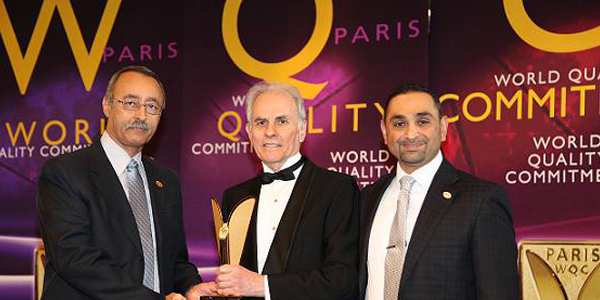 Waheed Rousan, General Manager, and Haitham Shaheen, Director QA of Jordan Airmotive Ltd. Co., a leading company in its sector and in Jordan, received the B.I.D World Quality Commitment Award at the 24th World Quality Commitment (WQC) Convention in Paris, city which opened its doors to a gathering of those companies, and their leaders, that are most dedicated to quality and innovation, two key requirements for the distinguished honor of receiving the Business Initiative Directions Quality Award. Jordan Airmotive is an independent approved maintenance organization responsible for engines that power aircraft such as the airbus and Boeing. From 54 different countries, only the best assembled in the center of the international metropolis of Paris to receive what many call the "Oscar of the Business World."

Jordan Airmotive Ltd. Co. was honored in Paris before an international body of top business practitioners and representatives of the diplomatic corps. Before this summit, Waheed Rousan, General Manager, and Haitham Shaheen, Director QA of Jordan Airmotive Ltd. Co. received a distinction given by B.I.D. to companies committed to quality, the World Quality Commitment Award, by the President of Business Initiative Directions, Jose E. Prieto.

At the WQC Welcoming Reception, the General Manager of the company Waheed Rousan spoke about the quality of Jordan Airmotive’s work with aircraft engines, to a background projection of visuals of different parts which were being displayed on screen. From its location in Amman, Jordan, the company has an international base of customers worldwide. Besides quality, explained Waheed Rousan, the company also implements state of the art equipment into its facility to keep up with the constant upgrades of the industry. The Award was dedicated to the entire Jordan Airmotive team.

Along with the B.I.D winners, Jordan Airmotive Ltd. Co. was honored before those gathered at the World Quality Commitment Convention, and featured to the business world through graphic and digital media broadcasting coverage for their noteworthy commitment to quality, excellence, and innovation.

The companies awarded at the gathering in Paris were distinguished not only for their business success, but for their dedication to continuous improvement, abiding by the principles of the B.I.D.- created QC100 model of Total Quality Management, a formula for business success that values commitment to quality, customer satisfaction, communication, benchmarking, information analysis, leadership, planning and decision-making, human resources, continuous training, production systems, and business results. Its main focus is the commitment to quality and innovation. Therefore the winning companies in 2010 were acknowledged for their example for other companies that wish to progress in the ever changing and challenging economic, technological, and business environment. The companies awarded by B.I.D. are not only successful, but they push the rest of the world forward; contributing to the economies of their countries, and developing technology that can aid the world. These companies, like Jordan Airmotive Ltd. Co., provide a spirit of innovation, making the world a better place in which to live.

Commitment to Quality can be seen through those great companies that have previously been honored with the B.I.D. International Quality Award. Companies that already share B.I.D.'s corporate image in their logo, a symbol now present in more than 170 countries.

Waheed Rousan, General Manager, and Haitham Shaheen, Director QA, stood before the international community present at the 2010 Quality Convention, sharing the achievements of Jordan Airmotive Ltd. Co. as well as proposals for the future of their industry, clearly proving to be one of those leaders around the globe that, instead of yielding hands down to the current global financial situation, spends every day excelling in quality, and creating a cutting edge of competition that will propel the company into the future. For this reason, Jordan Airmotive Ltd. Co. was named winner of the 2010 B.I.D. World Quality Commitment Award in Paris, a trophy that B.I.D. presents to those companies from around the world that best adhere to excellence and innovation in their practices, putting quality first.