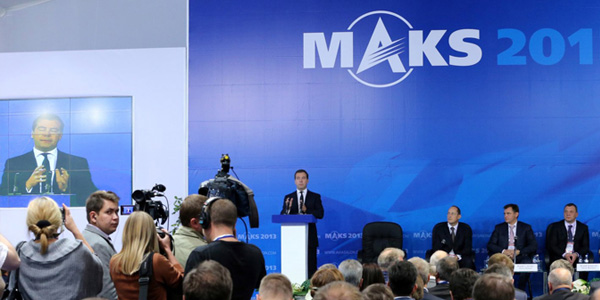 The International Aviation and Space salon MAKS is a rightful occupant of a leading position in the ratings of major world aviation forums. The very idea of the MAKS lies in demonstrating Russian high technologies and domestic market openness to joint ventures with the use of foreign partners' cutting-edge advances.

MAKS is held under the auspices of the Prime Minister of the Russian Federation, being traditionally opened by the President of the Russian Federation. This is the warranty of superior organization and authoritative participants. During the show, top civil servants are open for business contacts. For all those engaged in aerospace business the air show is a unique opportunity to get the first-hand information on the standpoints of decision-makers whose position can have an impact on key issues of developing and selling aircraft and their weapons, as well as on cooperation in these fields.

MAKS provides participants with the most comprehensive understanding of the Russian aerospace industry's priorities and advances. MAKS AirShow is the only place where one could see aircraft and weapons system prototypes as well as experimental systems that cannot be shown abroad due to some or other reasons.

MAKS provides experts and businessmen a rare opportunity to establish contacts at various levels, further development of R&D and production cooperation and search for new business partners. The role the MAKS plays as a generator of new alliances and promising concepts has been recognized worldwide.

MAKS is held in the town of aircraft science and technology - Zhukovsky - at the airfield of the major national testing facility - Gromov Flight Research Institute. The participants in the show will be able to visit nearby major research, production and experimental organizations of Russia.

High on MAKS agenda are scientific conferences and symposia held under the auspices of the Russian national research centre -TSAGI. The events enable scientists and experts to trade their idea concerning topical aerospace issues of the present and past.

The Jordan Airmotive’s will be in hall F3 - Stand A16