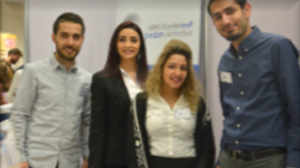 In its quest to enhance the role of social responsibility, Jordan Airmotive (JALCO) was honored to participate in German Jordanian University career fair day 2017 which was held on 19th April in the GJU campus.

his participation was to strengthen the cooperation between theoretical& technical side in the community, as Jordan Airmotive (JALCO) took upon itself to grant the graduates the technical training getting involved in the business world creating appropriate competencies for the labor market